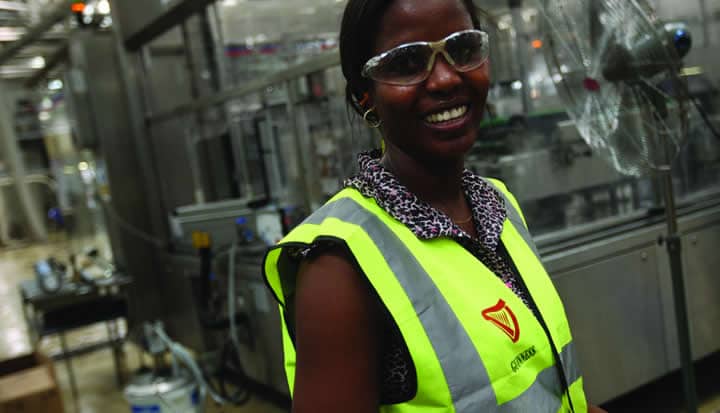 Click here for more stories about
Enterprise
Friday May 16 2014

Nigeria, the most populous country in Africa has one of the fastest growing rates of unemployment on the continent averaging 14.60 per cent from 2006 until 2011 and reaching an all-time high of 23.90 per cent in December 2011. Youths under the age of 30 constitute over half of the unemployed masses.

As is the case in many African countries, the government is the biggest employer in Nigeria but the private sector is growing in size and has an increasingly important role as an employer, particularly for the younger population. In October 2013, Alhaji Aliko Dangote, Chairman of the Dangote Group and the richest man in Africa, announced plans to create 750,000 jobs in Nigeria over the next 5 years, which would make him by far the largest employer in the country. He is not alone in the quest to reduce unemployment figures in Nigeria with many corporate bodies offering various schemes and opportunities for skilled and unskilled workers to earn a living in an economy where UNICEF reports that over 70 per cent of the population live on less than a dollar a day.

Guinness Nigeria, a subsidiary of Diageo Plc.—established in 1960, and the first ever Guinness brewery to be built outside the British Isles—has become part of the very fabric of Nigerian life. Its flagship brand, Guinness Foreign Extra Stout, is one of the most adored and recognized brands in the country. Guinness Nigeria plays a major role in the jobs market. In 2011 and 2012, the company was recognized as one of the best places to work in Nigeria, the only beverage manufacturer to be so highly placed in the rankings. All these contribute to the reason why the country is now the number one market by net sales value for Guinness Stout in the world, taking over from Ireland and Great Britain.

The 2012 Enterprises Baseline Survey produced in collaboration with SMEDAN (Small and Medium Enterprises Development Agency of Nigeria) showed that there are over 17 million small and medium enterprise (SMEs) in the country, employing about 45 per cent of workers and contributing almost half of Nigeria’s GDP. SMEDAN further estimates that the Nigerian economy cannot maximise its export potential or fully industrialise until 80 per cent of the labour force are engaged in SMEs.

“The Nigerian environment is tough, especially when you are a start-up”

Brooks & Blake is a small public relations consultancy and one such Nigerian SME. For some time following its establishment in 2010, Guinness Nigeria accounted for some 50 per cent of its overall earnings. The company currently employs 23 full time employees and works with over 40 medium to large-scale organisations on behalf of Guinness Nigeria. If each of those companies has an estimated 10 or more full time employees then the impact of Guinness Nigeria’s presence in the wider economy can really be understood.

Sola Fijabi, the Management Lead at Brooks & Blake says: “The Nigerian environment is tough, especially when you are a start-up and we often hear of companies that started and crumbled because of the tough economic and commercial challenges we face in this environment. Having the support of a company like Guinness made a major difference. We were able to leverage that relationship to plan our funding and growth over the years. I don’t think it would be an exaggeration to say that Guinness played a part in our sustenance strategy especially in the first couple of years of our business.”

Another example is GZI, an aluminium manufacturing company which has been working with Guinness Nigeria since 2010 and has been a key driver of the expansion that the company has experienced in the years since. Currently, Guinness Nigeria accounts for over a quarter of GZI’s total income and has enabled the company to employ over 200 full time staff.

For companies like Brooks & Blake and GZI, working with Guinness Nigeria has enabled them to grow their business and in turn create more jobs for Nigerians.

In the area of local raw materials sourcing, Guinness Nigeria purchases sorghum from the country’s local farmers, through millers who act as intermediaries to the farmers. The use of intermediaries has several advantages top among which is that they help to receive and organize the harvest from local farmers and process it before selling to buyers like Guinness Nigeria. Through this arrangement, Guinness Nigeria’s contribution ensures that an estimated 120 people have full time employment working for the millers and many more people have the opportunity of casual work. The same value chain mechanism can be found with other locally sourced raw materials.

Recently, Guinness Nigeria ran an impact assessment exercise which showed that if the company was to import beverages rather than produce them locally, the Nigerian economy would lose at least $28 million (0.1 per cent of GDP) of value added and 35,000 jobs (0.04 per cent of the labour force). As the company looks to increase local sourcing over the next 5 years, an additional 7, 000 extra jobs will be created, especially for local farmers.

Obviously, job creation statistics do not say it all. Guinness Nigeria’s interventions extend to the provision of potable water in rural communities, which has an impact on elementary school enrolment as children are freed from the laborious journeys to distant streams in the mornings and can attend school instead. The company’s social investment also includes both technical education and tertiary scholarships which enable disadvantaged students to acquire advanced education in areas like engineering, law and business management, contributing to the pool of talent that is essential to support Nigeria’s future development.