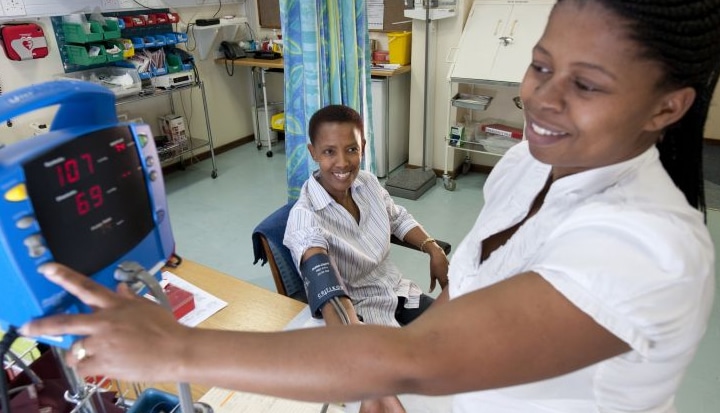 By the 1990s, HIV/AIDS was taking a terrible toll on Anglo American’s workforce in South Africa. Despite company education and awareness programmes, Anglo American was training two people for every job on the grim calculation that one out of every two workers would die of the disease. The public health system lacked the capacity to control the epidemic.

In 2002, Anglo American decided to go beyond education and testing and provide free treatment to all workers diagnosed with HIV/AIDS – thus initiating the world’s first large-scale free corporate treatment programme. Anglo American’s comprehensive approach to the disease encourages all workers to “know their status” through voluntary counseling and testing, which underlines the importance of prevention and enables early diagnosis. Those who test positive get help managing their condition through wellness programme and free anti-retroviral treatment for as long as they need it.

Anglo American’s workforce HIV/ AIDS programmes are delivered largely through the company’s own health infrastructure, including three fully-equipped hospitals it has operated for decades as part of mine medical services. However, several specific functions are outsourced to third parties, like testing and record keeping – despite its clear policy of non-discrimination, Anglo American believes it should not “own” information on the HIV status of its employees to send a strong message that an individual’s HIV- status will not be known or used by the company in any way.

Since the company began offering free treatment in 2002, voluntary testing has increased from below 10% to over 80%. HIV prevalence in the Anglo American workforce is approximately 15%, which is below the average in South Africa, indicating that its efforts are having some effect. But there is still work to do. For example, based on the success of the workplace programmes, the company announced in 2008 that it would extend treatment to the dependents of employees.

When Anglo American began its HIV/AIDS work, it had to “go it alone.” Considerable results have been achieved. But curbing the disease in the workforce is part of a broader, systemic challenge the company cannot tackle alone. For example, healthy workers depend on healthy families, but approximately 20% of Anglo American’s South African workers are migrants from provinces where the company has no operations, or from neighbouring states. These workers leave their families in rural regions like the Eastern Cape where there are no company health facilities, and where public health infrastructure is weak or missing.

In these regions, there are no delivery channels for the company’s free treatment programmes. Near the mines, where delivery channels do exist, the bottlenecks are different – social, cultural, or political. Of workers who test positive, for instance, only 50% currently take advantage of the company’s free wellness programmes, which are critical to keeping the disease at bay. With better public awareness and less stigma, uptake – and survival – could be significantly higher.

Greater partnership with government could help address some of the systemic issues underlying HIV/AIDS in the workplace – and leverage Anglo American’s experience for the benefit of South African society at large. In addition to government, there are potential roles for non-governmental organisations and private sector providers as implementing partners. And international multilateral and academic institutions could play valuable roles transferring know-how and helping replicate successful models.

With government commitment increasing, Anglo American is exploring ways of tapping the potential of partnership going forward. In 2007, for example, the company partnered with the Northern Cape Department of Health to open the Gogi Modise Wellness Clinic near its Sishen mine. The clinic provides voluntary counseling, testing, and treatment, and uses peer education and theatre to educate community members about related issues such as sexually transmitted disease and domestic abuse. In another, emerging example, the company is talking to the provincial health ministry of the Eastern Cape about health systems strengthening work that would begin by identifying barriers to effective primary care, the first line of defence against HIV/ AIDS and many other diseases. As such partnerships develop and grow, the company hopes its experience will become part of the fabric of a systemic solution to the HIV/ AIDS epidemic in South Africa.