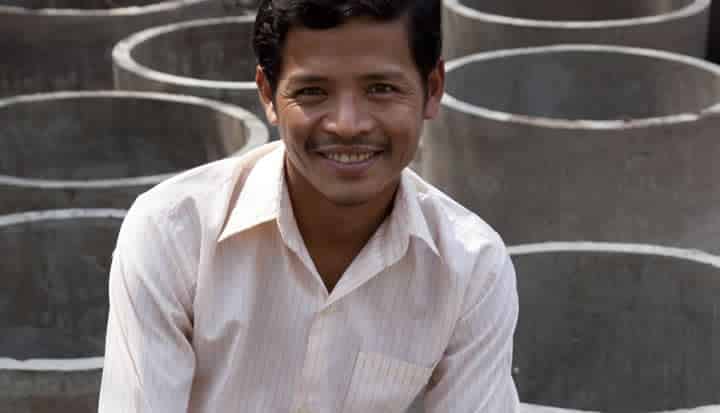 
In our imperfect world, many people live in market systems that are broken – they don’t provide access to the basic things people need to live. iDE is a mechanic of broken markets. We try to look at every component of the market system to see how it can run better to benefit the individual. From sourcing raw materials to teaching sales agents how to close a deal, an engine won’t work if even one part is missing.

Before iDE’s intervention, many rural Cambodians thought they could never afford a good-quality latrine. While some people saved for years to afford the cost, most people just tolerated life without one. Diarrheal disease, increased vulnerability of women, humiliation, discomfort and general unpleasantness were facts of everyday life.

In a period of two years, 100,000 latrines were sold by the small businesses with whom iDE partners. This article explains key aspects of the program that contributed to that success.

At first, very few businesses were interested in producing and selling sanitary latrines to the rural poor. However, using the Human-Centered Design (HCD) approach, we identified the unique needs, desires and barriers of users and produced a product that households wanted to buy and businesses wanted to sell, creating a sustainable solution that can be scaled across the country.

The design effort began with in-field contextual observations and interviews with the key stakeholders involved in latrine manufacturing, installation and use. The learnings from the observations were distilled and synthesized into a framework that illustrated the potential opportunities for the design offering and showed where it fit into the greater sanitation marketing effort.

(Since the business model was changed from high-margin low-volume, to high-volume low-margin, enterprises like the one at right can improve net profit.)

From there, multiple rounds of brainstorming, prototyping and user testing were undertaken to develop the latrine designs. From the multiple iterations, a design direction emerged that addressed user needs as well as marketing thoughts around how to position the benefits and costs of latrine ownership.

In the first phase of the project, iDE spent two weeks in the field talking with villagers, ring producers, retailers and masons to understand behaviors, needs and desires regarding latrines. All interviews and observations were performed in context – at the villager’s home, at the retailer’s store and at the ring producer’s lot. Coming out of the user research, eight design principles were established to guide the work moving forward:

1. Let everyone "go wet": Cambodians have an extremely strong preference for pour-flush latrines over dry pits.

3. Work from the bottom up: Focus on designing the underground part of the latrine, as that is the element that most users understand the least.

4. Reflect “in-progress,” not “temporary”: Position the latrine as upgradeable over time so users are not waiting, saving for the most expensive model.

5. Divide the pit, slab and shelter (mentally): Doing so makes it seem easier and more manageable.

6. Set the stage for the mason: Reduce complexity and eliminate the need for expensive skills like laying bricks, but allow the mason to provide simpler, cheaper services such as mortaring the pieces together.

7. Show few options but enable many: Offer one simple underground to avoid paralysis by analysis, but allow users to customize the shelter according to their financial means and aesthetic preferences.

8. Support the shopping: Reduce the complexity of the purchasing process.

In the course of the design project, iDE took four trips to the field after the initial user research to review prototypes with stakeholders – villagers, masons, ring producers and retailers. In all cases, a number of 2D and 3D prototypes were shown.

During the 16-month implementation phase of the Sanitation Marketing Pilot Project, which was funded by USAID with technical support from the Water and Sanitation Program (WSP) of the World Bank, 10,621 Easy Latrines were purchased by households without subsidy, at a retail price of about U.S. $35.

The Easy Latrine served as a catalyst in the project to stimulate general interest of businesses to join the latrine market by seeing “proof of concept” of other businesses making a consistent profit from selling latrines to rural households. That is, the Easy Latrine was not the only latrine being sold. For every one Easy Latrine sold, 1.12 “other latrines” were also sold, resulting in a total of 17,424 additional latrines purchased, increasing the baseline rate of latrine adoption by fourfold.

A total of 24 local businesses were engaged during the project through training provided in the manufacture, promotion and sales of the Easy Latrine. On average, the annual revenue of engaged businesses increased by 259 percent.

Given the successful results of the Sanitation Marketing Pilot Project, iDE secured funding from the Bill & Melinda Gates Foundation, the Stone Family Foundation and WSP to further scale up the market-based approach from the original two provinces to a total of seven provinces across Cambodia. In just over two-and-a-half years, the scale-up program in Cambodia has facilitated the sale of more than 100,000 latrines by more than 100 local businesses, creating a ripple effect of 1:1 – for every latrine sold by an iDE-trained business, another latrine is sold by an “other” business, resulting in more than 200,000 latrines in the just the past 2.5 years, impacting the lives of over a million people.

The successful results of the pilot project in Cambodia also helped secure funding for sanitation market development efforts in five other countries – Bangladesh, Ethiopia, Nepal, Vietnam and Zambia. Replicating process, not product, iDE used the HCD approach to design products and business models that are appropriate for the widely different contexts of the various locations.

• Through the replication of a process and not a business model, iDE is able to design solutions for market failures across different country contexts.

• True innovation does not lie in the product alone. It is essential to get the product right, but the product serves as a catalyst for a thriving business model that serves the needs of both producers and consumers.

• Engagement with users at every step of the design process is key to effective rapid prototyping. You never know if it will work until you test it with the user.

This blog was previously published on NextBillion.net and is reproduced with permission.