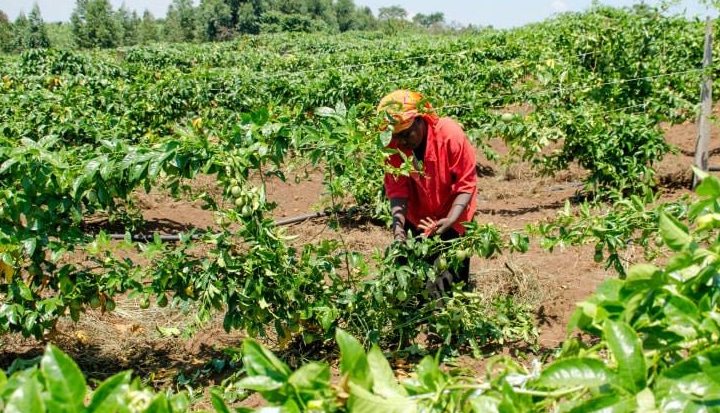 
On a road trip from Uganda to Kenya in 2010, Eric and Rebecca Kaduru were hit with a stark realization as they crossed the border. Driving into Kenya the roads became lined with thriving, large-scale agricultural ventures; during the six hours they had spent travelling from Western Uganda to the country’s Eastern border they had not seen one large-scale agriculture project beyond the tea and sugarcane plantations that had been operating since Uganda was a British colony. Why was so much lush, fertile land sitting unutilized while imports flowed across the border to satisfy demand?

Eric and Rebecca Kaduru had met in Kampala, Uganda where they’d both been working—Eric at an advertising agency and Rebecca for an NGO. Rebecca admits to having moved from California to Africa in 2008 on a whim. Eric on the other hand was born and raised in Kenya, before he returned to Uganda, his father’s home country in 2008.

After the pair became engaged, whilst driving to Kenya for the holiday season they witnessed first hand the disparity between the two countries.

Impact Lab spoke recently to these two young entrepreneurs to learn how they had realised their vision of reinvigorating commercial fruit production in Uganda and in the process empowering girls to become active drivers of economic growth.

The two college graduates jumped into farming with little knowledge of agriculture.

Through hundreds of meetings and countless hours of research on Google, Eric and Rebecca learned that passion fruit—a popular fruit in Uganda typically made into juice—was being imported from Kenya. Imports provided for 70% of Uganda’s passion fruit consumption. The value of passion fruit farming had been realised for years in Kenya, but in Uganda it is typically grown on a small scale for personal consumption. After visiting a passion fruit farm in Kenya and meeting with both NGOs and private companies they realized the need and viability of the crop in Uganda.

With fertile soils and high altitudes, Ugandan farmers could be fully capable of meeting the country’s demand if equipped with the skills and quality inputs to grow the high value fruit. But despite 82% of the population in Uganda claiming agriculture as their main source of income, the sector makes up only 22% of GDP. Chronic political instability and economic decline in the 1980’s, caused the collapse of Uganda’s agriculture cooperative system, and a shift to subsistence-based agriculture.

Transitioning from an idea into reality

Armed with this knowledge, Eric and Rebecca founded KadAfrica with the social mission to empower smallholder farmers through the cultivation of commercial scale fruit.

They never foresaw the obstacles ahead—a six-month wait for seed, no tractor for hire within 250km of the farm, and having to import the most basic fertilizers from Kenya. Although, they were able to overcome these hurdles with the help of family members across the border they asked themselves the question 'how can the average subsistence farmer make agriculture profitable if they have no access to inputs or knowledge of the country’s potential?'.

Initially, Eric and Rebecca cultivated fruits and vegetables such as tomatoes and eggplant before transitioning to passion fruit. During that time, they built relationships with farmers and gradually began introducing passion fruit.

Resistance of Ugandan farmers to adopt commercial farming is understandable. Farmers typically have to walk a couple of hours to the closest marketplace and once there they have no bargaining power when dealing with traders who offer them low prices. With no storage facilities on their small plots of land the farmers are unable to turn back with their produce.

The experience highlighted for Eric and Rebecca a major issue affecting the profitability of agriculture in Uganda—exploitation at the marketplace. Lack of education, diversification, and poor agricultural practices means that farmers in Uganda receive on average 33% to 45% of the wholesale price at a marketplace dominated by traders.

The experience also taught them the importance of being able to store a product with a limited shelf life and to transport it easily for wholesale to urban market places.

Redesigning their initial concept of commercial agriculture around the realities of the Ugandan marketplace, Eric and Rebecca remained determined to demonstrate that the production of passion fruit in Uganda’s Western highlands was possible and that venturing beyond typical subsistence crops made business sense. The pair also believed that the vertically growing passion fruit vine was ideal as it would allow smallholder farmers to grow ground dwelling crops to feed their families while generating income through a surplus of passion fruit.

Between 1990 and 2000, passion fruit was cultivated on a commercial scale as part of an export initiative of the Ugandan government. In 1998, exports peaked at 50 metric tons, however by 2005, only 7 metric tons of fresh fruit were being exported from Uganda due to reduction in productivity and quality attributed to biotic and management related factors.

The need for investment

Using a small amount of personal funds to start the company, Eric and Rebecca had registered the company as a for-profit with the aim of achieving sustainability through sales of passion fruit.

However, in order to provide free year-round training, seedlings, agro inputs, and agribusiness support to smallholder farmers and to introduce irrigation, Eric and Rebecca needed an outside investor. Attracting additional investment proved difficult. Grant-giving organizations were unwilling to fund a for-profit, while venture capital investors were hesitant to support KadAfrica’s social commitment.

Searching for a partner that shared their vision of building a commercial agribusiness capable of creating social change through the production and bulk marketing of passion fruit was essential.

Finally, the venture capital firm The Mango Fund stepped in with the investment needed.

In 2012, the KadAfrica Estate became the largest passion fruit plantation in Uganda, and the only one that is fully drip-irrigated for year-round production.

An innovative out grower model

In May 2013, KadAfrica was able to scale up its model through a public-private partnership with Catholic Relief Services (CRS), Caritas, and the Catholic Diocese of Fort Portal.

The Girls Agro Investment (GAIN) project provides out of school girls with the financial, entrepreneurial, and life skills as well as physical resources, such as land and inputs, needed to provide sustainable livelihood options.

KadAfrica and CRS designed an innovative out grower model, where out of school girls are grouped throughout 6 parishes in Kyenjojo District on plots of between 1.5 to 3 acres to promote cooperative support, reduced transport costs, and bulk marketing of passion fruit. Girls are provided with a 240 square meter plot of land, 45 stems of passion fruit, and a ready market for their produce through KadAfrica. A unique feature and innovation of the GAIN program is the use of church land made available to landless GAIN members through a post-paid rental plan. This innovation helps address the lack of access to resources facing rural out of school girls, while allowing local church partners to introduce more sustainable development interventions and to use their local resources more strategically.

Over the 2.5 year project lifespan, 1,500 out of school girls will be trained in managing an agribusiness as well as learning to save and manage money.

By October 2014, KadAfrica will be purchasing at fair market value an additional 85 acres of passion fruit under cultivation by the GAIN girls and transporting it for urban wholesale —making it one of the biggest horticulture projects in Uganda and the first to pilot the use of church land for commercial scale agribusiness development.

Though fundraising is an ever-present task, both Eric and Rebecca have noted a change in aid trends since beginning KadAfrica. Grant making organizations have begun to embrace social entrepreneurship, and being a for-profit in the development arena is transitioning from faux pas to an acceptable, sustainable methodology for creating social change.

To learn more about KadAfrica, visit their blog.