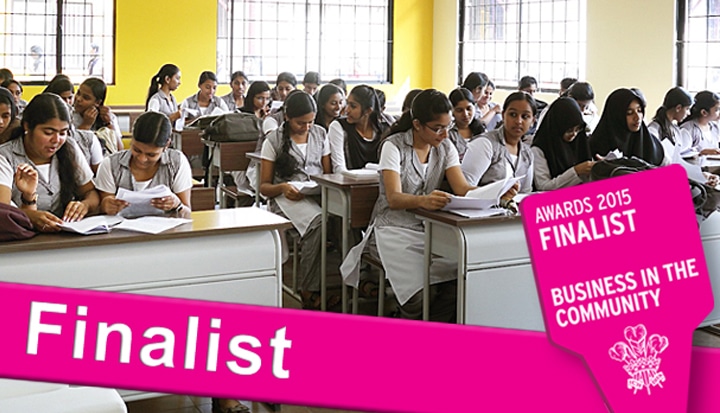 KEF Holdings set up the PRISM project as a practical and compelling PPP prototype to demonstrate the impact of upgrading government schools in India to international standards.

The Indian Government faced a longstanding challenge: how to inspire students in government schools to complete their education.

India has 1.2 million government-run schools, used by over 140 million students, but many of these suffer from inadequate, outdated and deteriorating buildings, a lack of sanitary facilities and an unhygienic environment. These conditions lead to low teacher morale, low enrolment rates and a high drop-out rate.

The lack of access to quality education facilities hinders the poorest sections of Indian society, for whom education is the only way out of poverty.

Creating a showcase for the power of PPP

PRISM transformed a 120-year-old, dilapidated Government Vocational Higher Secondary School in Kerala, India into a showcase building with modern facilities. The school caters for 2,400 girls, among the poorest in India.

The heritage section was restored and new components were built. These included a sports complex, dining and kitchen complex, and a toilet complex. As well as improving the learning environment, hygiene was improved - previously there were few toilets and they were not serviced. Corporate-level Catering facilities were also improved enabling better meals for students.

The project is not just about buildings: as part of PRISM’s long-term commitment to the school, a School Development Committee was set up that includes teacher, student and parent representatives. To bring staff up to speed, 83 teachers were trained by the Indian Institute of Management.

With the PRISM project, KEF set out to create a practical PPP prototype that would act as a showcase and would inspire others to replicate it on a wider scale. As a result of this pilot project, 20 government schools are now following a similar PPP model, and at least two private schools have undertaken a similar transformation. KEF is in discussion with the Government of Kerala on their Mission 100 programme, aimed at transforming an additional 100 schools.

“At KEF Holdings, everything we do revolves around our mission to make a positive difference to society. Since KEF is a company with Indian roots, we wish to make this difference in India first. As an organisation we specialise in offsite construction, and we have set our eyes on using this core competency to begin a process that can lead to the transformation of India’s dilapidated 1.2 million government schools – bringing much needed relief and hope to 140 million poor students. Through the deployment of our organisational assets and strategic partnerships, we have begun the journey of transforming not just the physical infrastructure of schools, but also renewing entrenched mindsets in government and private circles.” - Faizal E Kottikollon, Founder-Chairman, KEF Holdings