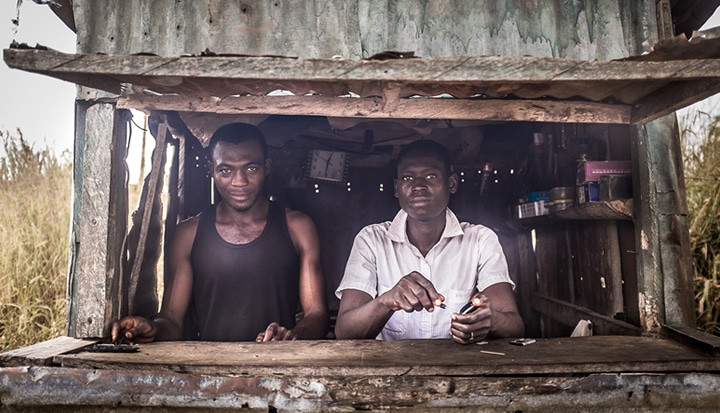 Click here for more stories about
Agriculture
Monday May 12 2014

Nigeria is a country of contradictions. Enormous wealth coexists with desperate poverty, and a decade of strong GDP growth has not managed to reduce poverty in all parts of the country. The dynamism of Lagos, with an economy larger than Ghana, stands in stark contrast to economic decline across the North and particularly the increasingly destructive conflict in the North East.

While the South is prospering, the North is not, and the growing regional disparities in economic and human development have led to entrenched poverty, social exclusion and growing feelings of injustice and frustration. These grievances have contributed towards instability and a conflict that is growing steadily worse and which will in turn reduce investment and growth potential in the North. There is a risk of conflict spreading further south and disrupting the economy of the entire country. Inclusive broad-based and poverty-focused development in the North is an essential part of the solution to this problem.

With poverty rates falling across the South, poverty is increasingly concentrated in Northern Nigeria. The North West and North East zones together hold half of all the poor people in Nigeria and poverty rates actually increased in those zones between 2004 and 2010. Sixty-four per cent of the poorest quintile of Nigerians live in these areas.

DFID-Nigeria is responding by working to reduce poverty and to support economic growth in six Northern focal states—Kaduna, Kano, Katsina, Jigawa, Yobe and Zamfara—in addition to continued investment in Lagos and Enugu.

DFID’s work here is concerned with helping Nigeria to use its own resources better, and a large part of this is helping to create a strong enabling environment for business to invest, develop new markets and create jobs for women and men. The major constraints to business growth in Nigeria are clear—weak infrastructure, expensive and inaccessible finance and a poor regulatory environment, and DFID programmes are focused on easing these constraints.

A good example is the Nigeria Infrastructure Advisory Facility (NIAF), a technical assistance programme designed to enhance the Government’s capacity to better plan, finance and operate infrastructure delivery at both Federal and State level. NIAF support to the current power privatisation process could have transformative impacts on Nigerian industry, particularly in the North which receives far less power per person than the South. By 2015, DFID’s economic growth programmes will increase the incomes of 600,000 poor Nigerians, of whom 500,000 will be in the North.

Though the challenges facing businesses in Nigeria are real, so are the opportunities, even in the North of the country. The old industries in the North, such as textiles, have been in decline for decades but there is potential for new industries to spring up in their place. Large populations mean that there is ready demand for demand for goods and services both in the Northern states and targeting the South if transport connections can be improved. Rather than looking backwards to traditional industries, the key to success lies in spotting unmet local demand and being able to meet it. Our Business Innovation Facility is helping businesses in Kano to develop inclusive business models that will prove profitable for them as well as benefiting the poor. Large urban centres also hold out promise for agglomeration effects and clusters of industry.

Despite relatively high population densities, there is still a lot of fertile land to be exploited across Northern Nigeria. With improved access to inputs and advice on how to use them, many farmers could significantly improve their productivity to increase their incomes and reduce poverty. Increased production would also lead to significant opportunities for investment in agro-processing, agro-allied services and value addition.

Government attitudes towards the private sector are also starting to shift. State governments are waking up to opportunities to generate tax revenue internally (as Lagos has successfully done), rather than relying on federal distributions of oil money. This requires improvements to the investment climate and DFID’s Growth and Employment programme (GEMS3) is supporting states to enact such reforms in tax harmonisation and land registration. The business advocacy programme (ENABLE) is helping the private sector to open constructive channels of dialogue with government.

“Rather than looking backwards to traditional industries, the key to success lies in spotting unmet local demand and being able to meet it.”

DFID is supporting growth and job creation in the meat and leather industry, the wholesale and retail sector and various rural markets. We are supporting the finance industry to provide financial access to the poor, enabling savers to build up a financial history with a bank which should in time lead to greater access to credit. We are also supporting state governments to scale up labour intensive rural road maintenance public works programmes that will both create jobs and improve access to markets for rural communities.

History and experience show that economic development is essential if countries are to leave enduring and chronic poverty behind for good, and this is a key area for DFID’s work across the world. Britain’s International Development Secretary Justine Greening announced earlier this year that Britain will more than double its investment in supporting private sector-led growth and job creation in developing countries. DFID will continue to support Nigeria to create competitive markets that can raise the incomes of the poorest and contribute to a stable, prosperous country.