No More Missed Opportunities in the Fight Against Malnutrition 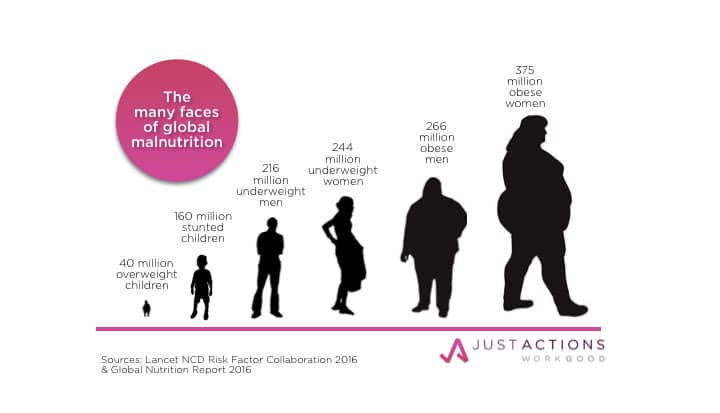 No More Missed Opportunities in the Fight Against Malnutrition


Will we ever see the same level of government-industry collaboration tackling malnutrition as the impressive efforts to fight HIV/AIDS and vaccinate the world’s children?

The answer has to be yes.

The human and economic costs of malnutrition now exceed the costs of HIV/AIDS and infectious diseases, and in contrast to both, malnutrition is rising, not falling, in every region of the world.

Every country is affected by an overweight or underweight problem, and a number struggle with both — the so-called “double burden” of malnutrition.

With the costs of malnutrition rising and the clock ticking on the new goals that must be achieved by 2030, it should be no surprise that governments are desperate for solutions. Witness the recent UK sugar tax, which will hit the poor at a time of high and rising income inequality and like similar efforts (e.g. Denmark’s “fat” tax), may not actually change habits.

But it’s not as if governments are flush with other policy options when it comes to tackling overweight and obesity. Existing public policies have focused on undernutrition, especially among children, with mixed results.

One of the reasons for the lack of public policy focus on overweight is the failure to engage the very companies who make and market what we eat and drink, and profoundly shape our food tastes and preferences.

When the prestigious medical journal, The Lancet, dubbed this failure to engage the private sector “a missed opportunity” they were roundly criticized, but as almost every adult in the world buys food and beverages from a business, it’s hard to see how much will change if farmers, small and medium sized companies and large multinationals don’t.

But how to influence food and beverage markets? What kind of public policies can truly shape the food that is grown and produced, and the way it is marketed? What types of policy instruments can influence both supplier and consumer behavior and all of the actors who mediate that relationship (e.g. advertising, transport and telecommunications companies)?

How to leverage the influence of investors and shareholders on industry practices that affect nutrition and the influence of voters on governments that fail to prioritize the greatest risk to the health of their citizens?

We can’t answer these important questions because we are currently missing two essential ingredients: (1) policy entrepreneurs from both the public and private sectors with a deep understanding of both government tax and transfer systems and markets, and (2) government-industry backed processes that enable these policy entrepreneurs to co-create a suite of policy instruments that can be rigorously tested, evaluated and implemented.

Yes, there have been many excellent reports and promising nutrition initiatives released in recent years, but not one has produced a set of public policies backed by governments and industry, because not one of these reports or initiatives was a genuine collaboration between the two sectors.

The routine exclusion of companies from the nutrition policy table is justified as protection against “conflict of interest”, but while the risks of including the private sector are likely overstated, the price for exclusion is certainly not. Not only has exclusion produced public policies that have consistently failed to scale, but it has created unintended side-effects that have made it “more difficult for the private sector to be a major contributor to the collective creation and sustenance of momentum for reduction of malnutrition”, to quote the Lancet again.

But if we could get the best government and industry minds together, especially those who bring expertise from treasure chest of behavioral economics, what might they come up with?

I think we would see a greater focus on incentives rather than penalties and restrictions, including tax benefits for businesses that grow, produce and market healthy crops and foods, cash transfers to consumers conditional on purchasing healthy foods, and price subsidies that make healthy choices cheaper. Expect to see a big focus on food innovation (e.g. increased investments in the new companies exploring vegetable-based products) and a revolution in food labeling and packaging, all driven by technology.

To jumpstart this process, governments with the highest obesity rates (above 20%) should announce their own Decade of Nutrition Innovation & Experimentation. Imagine the leaders of the United States, Mexico, Egypt, Saudi Arabia, Turkey, the United Kingdom, Argentina, South Africa, Russia and Brazil standing together with the CEOs of the largest food and beverage companies*, and flanked by Finance, Agriculture, and Health Ministers, announcing a new era of unprecedented collaboration to fight the many faces of malnutrition.

What role in this new era for the United Nations, NGOs, and civil society leaders committed to a healthier future?