Arafa: The Tanzanian Solar Engineer Leading the Way for Other Women in Her Village 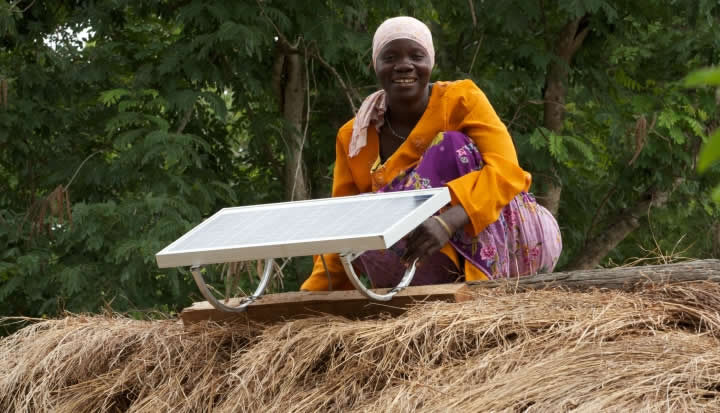 The Tanzanian solar engineer leading the way for women

International Women’s Day is an opportunity to highlight the challenges faced by women in some of the poorest communities in the world and to recognise the impact economic empowerment and increased participation in public life can have on their lives.

Arafa, a mother of four from a rural community in Southern Tanzania, was chosen by her village to train as a solar engineer as part of an innovative project between VSO volunteers and UN Women.

The project, run by VSO in partnership with Indian organisation Barefoot College, trains rural, illiterate women as solar engineers. The women gain income-generating skills, improve the quality of life in their villages by increasing access to electricity, and also gain greater standing in their communities, playing an increased role in local decision-making.

In Tanzania 60 per cent of women live in absolute poverty despite making up an estimated 80 per cent of the agricultural labour force[1]. Women are the main producers of cash crops, yet rarely gain access to the wealth they generate.

The political picture in the country shows how top-level political participation from women doesn’t always mean greater equality at grassroots level. Yes, there are more women MPs in Tanzania than there are in the UK[2], but at the village level, roles on the whole are traditional and men make the majority of decisions.

For Arafa, becoming a solar engineer has not only helped her secure a source of income but it’s also provided her with a voice.

“I was so happy when I found out I had been selected by my village to go to India to train as a solar engineer.

When I was younger, I had dreams. I wanted to stay in school and to read more. I wanted to become a teacher or a doctor but my parents didn’t have the money for further education so I had to drop out of school early.

I come from a poor background and I have had a difficult life. I was forced into marriage at the age of sixteen and lost my first two children before they reached the age of five.

The major economic activity here is farming and it is hard work. I used to work all day on the farm with my husband and would literally spend the whole day tilling the land. But when it came to the harvest, my husband would sell all the crops, leaving me and the children starving with no food.

A lot of women here suffer the same fate. It’s very common for the man to wait for the crops to be ready, and to go and sell them and just not bring anything back home.

I eventually divorced my first husband, remarried and I now have four children.

I first heard about the Barefoot Solar project when a consultant from UN Women came here to do feasibility research. He convened a meeting of all the villagers and talked to us about solar power and the project.

After several discussions, the villagers agreed to send two women to India to train as solar engineers and ran elections to decide who would go.

When I heard I was one of the women selected I was filled with happiness. I was excited about the training. I never imagined in my life that I would ever leave the village or travel to India.

When I arrived in India, the reality set in. The language barrier was a big problem and at first I felt completely lost.

But thank God, when we reached Barefoot College, about eight hours from Delhi, there were some women already there including women from Zanzibar who also spoke Kiswahili and they welcomed us.

In total there were women from eight countries including Uganda, Sudan and Malawi. We were able to somehow communicate through sign language and we became very good friends.

Indeed, meeting the other women made me feel that women, given the opportunities, can and are able to do something. It motivated me. I started to feel at home, started to relax and I got on well with the training, learning about circuit boards, soldering and solar electricity.

I came home after six months training in March 2012 and I have become quite a role model. There are women who look up to me and girls at school who even want to be a solar engineer like me. I feel I am setting a good example.

Since I came home I have fitted more than sixty solar panels in village homes and they have been a real benefit to the community but especially for women with babies. Before the solar panels they used to spend a lot of time in darkness because paraffin is limited and difficult to get. Now, with light, they can look after their children at night.

Arafa’s experience shows how building skills not only leads to women’s economic empowerment but can also enable women to participate in the decision-making that affects their lives.

[1]National website of the United Republic of Tanzania http://www.tanzania.go.tz/gender.html

VSO is an international development organisation which works through volunteers to tackle poverty in 33 of the world’s poorest countries. VSO is currently campaigning for the post-2015 development agenda to commit to tackling gender inequality. For more information see www.vso.org.uk/womeninpower