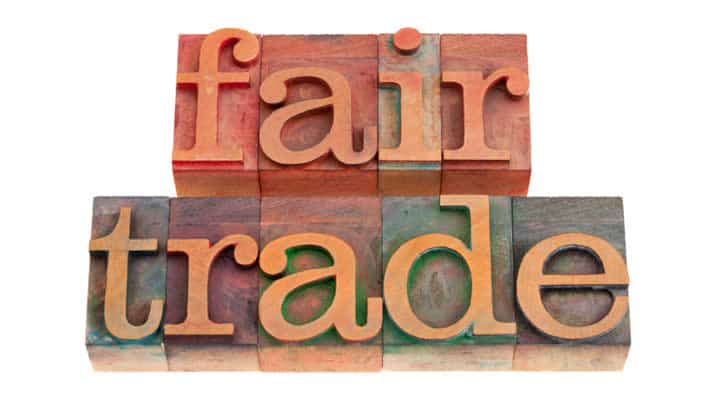 
Instead of firms having to prove they are good with FairTrade labels, Robin Roth, a speaker at the People Centred Business event at the European Parliament this week instead proposed a different starting point: companies should have to prove they are not bad, with all products carrying labels declaring ‘contains toxic pesticides’, ‘made with child labour’, ‘consumes scarce water supplies’ and so on, and companies only allowed to remove the labels if they can prove otherwise.

While the speaker himself said this was a “frivolous” proposal, it aimed at highlighting the “in-transparency” of current global markets where a handful of firms dominate trade and processing of food products to the detriment of producers and their social and physical environment. Those at the production end are left with little bargaining power and working in poor and sometimes dangerous conditions. This is in contrast to FairTrade and co-operative models, where the benefits are both material (men have more motorbikes) and social (women have more of a voice).

Value-chain integration for more of the same?

This kind of discussion is important in the context of promoting food security and value-chain integration in Africa.

The growing conventional wisdom is that farmers need access to markets through integration into (international) value chains, and therefore investment. Complementary investments need to be co-ordinated to ensure farmers get access to information, inputs, infrastructures and markets. As this investment has not been very forthcoming in most poor countries, efforts are now being made to encourage it through: greater risk-mitigating mechanisms and finance; private-sector led corridor approaches; and the growing use of multi-stakeholder partnerships to establish producer networks with donor finance. But does this risk perpetuating the status-quo with exploitative practices and environmental damage that FairTrade tries to work against?

To some degree, growing demand and high prices for raw materials are pushing firms, especially food firms, to pay more attention to their value chain and the welfare of their workers anyway. If farmers are no longer making their input products, major food manufacturers will have nothing left to sell. So in some ways there is a growing “natural push” towards “good behaviour”, backed up by reputation risks for the more visible firms (though perhaps less for some of the major traders)

This raises three questions about FairTrade and the Co-operatives movement which would merit further attention.

i) For its advocates, is FairTrade seen as The Model for all business of the future, or just certain aspects of it for certain sectors?

If the latter, what would those aspects and sectors be? The FairTrade and the Co-operatives movement represent a part of the NGO world that embraces farmers as private sector actors and recognizes the role of business in creating jobs and incomes. But they promote minimum standards so that this can be done in conditions that lead to a satisfying and healthy life. But which key aspects of the FairTrade model could most feasibly be adopted on a broader scale without the major paradigm shift towards negative labeling mentioned above?

FairTrade is discussed alongside talk of ‘scaling up’ and ‘mainstreaming’, words that we often associate with experimental ‘pilot projects’ where little is yet known about how well they can function. Might we learn more from breaking the model down somewhat?

ii) What would the impact be if FairTrade were to be massively scaled up?

Would the effects be unequivocally positive? There are discussions of major chocolate manufacturers aiming to be 100% FairTrade in the next few years – if these manufacturers are dominant world buyers, this could have major market impacts with positive benefits for FairTrade producers, but potentially negative impacts for those producers outside the FairTrade network. While one can imagine and hope for a world where all production of all products is produced according to minimum standards, what would happen in the interim between the current situation and 100% FairTrade production of cocoa, for example?

iii) Can effective co-operatives and greater collectivisation be brought about by outsiders and/or donor policies?

Co-operatives certainly seem to overcome a number of development challenges. They provide a collective voice for many individual farmers; they provide a degree of bargaining power; they overcome economies of scale in production (in the purchase of machinery for example); and they can provide social services while also developing as a business, either into new products or up the value chain. But can donors play an effective role in sustainably bringing these about? Don’t they need to be self-organised? And what policies can help bring this about? There appears to be a fine line here between ‘promotion’ and ‘coercion’, with a hint of Seeing Like a State creeping in.

The bottom line – it's always back to regulatory environments

As with many of the discussions based around business and development, a recurring point in discussing FairTrade is the need for ‘better regulatory environments’.

While undoubtedly true, regulations, implementation and enforcement are key whether discussing agriculture, manufacturing, trade, taxes, nutrition, education or almost any other aspect of development. To a degree development is ONLY about improving institutions and regulatory environments, so giving this as the key challenge is something of a tautology.

But all this is not at all to dismiss the notion that FairTrade and Co-operatives provide a useful and model. It would just be good to understand more about how the model actually works, what can feasibly be taken from experiences for broader application, and the role of policy beyond regulatory environments – or do we need to switch to having our shopping to be covered in labels?