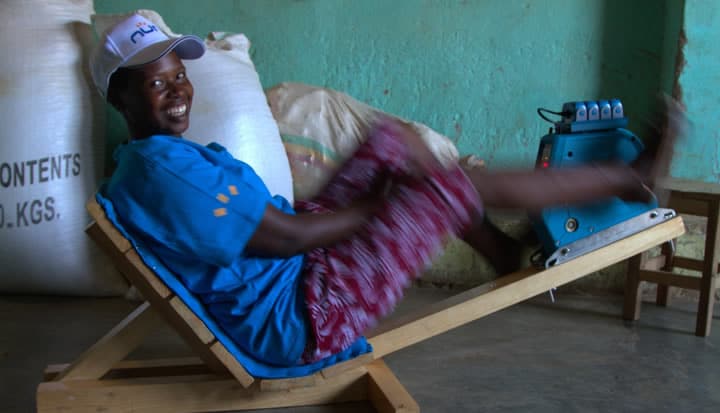 According to the International Energy Agency, 1.3 billion people around the world are denied access to electricity. Privation of energy and lighting is considered to be a significant barrier to many in the developing world, resulting in families and communities caught in an energy-related poverty trap. For instance lack of lighting not only affects economic prosperity but also social opportunities such as education and health care. The most common alternative method for providing energy, kerosene use, is both environmentally damaging and expensive. The majority of communities lacking access to energy are located in rural areas and more than 95% of them in sub-Saharan Africa or developing Asia.

The burden of traditional kerosene lanterns

A popular option for night time lighting are kerosene wick lanterns, which are used by some estimated 500 million households worldwide. Even though kerosene replaces the use of wood and hence may contribute to the reduction of deforestation, there are several problems associated with its use, including contributions to climate change and health related issues. When used in traditional wick lanterns, the burning of kerosene releases significant amounts of black carbon, which is known to be a far more powerful absorber of sunlight than CO2. From an economic and social perspective, while providing valuable lighting and energy, rural households are spending in the range of 10-20% of their incomes on kerosene. Innovative and cost effective solutions to address these problems could therefore improve human health and have definitive climate change mitigation effects by contributing to emission reduction.

Recent advances in alternative technology such as in solar have allowed for reduced costs and the increased efficiency of solar panels and associated products. While this improvement has facilitated an improvement in affordability, prohibitive costs remain to those most needing the technology.

The promise of solar lighting alternatives accessible to all

In Tanzania the start-up enterprise KARIBU Solar Power, winner of a 2013 SEED Low Carbon Award, recognised that the main barrier for current kerosene lantern users to purchasing solar lamps remained the initial cost. Therefore KARIBU Solar Power came up with a concept whereby consumers pay in small increments for a modular product, which replicate the required cash flow for Kerosene. This allows for the affordable purchase of high quality lighting and mobile phone charging, and allows poor rural communities to enjoy the benefits of solar lighting and energy.

Adam Camenzuli, Executive Director of KARIBU Solar Power, emphasizes that lighting and energy is a major challenge in Africa and developing countries. People do not have access to it but desperately need it. The average person cannot afford a solar lamp, which is why KARIBU Solar Power has designed a concept whereby the solar products can be purchased per component and therefore the payments for the end consumer are split.

Their innovative business model is based around the idea that the modular lamps are sold via a franchising network. “Basically a shop owner rents out a battery and light to the consumer for around 65 cents per day, the consumer returns daily and exchanges the component for a fully charged unit. After one month they have effectively paid off the lamp and get the solar panel. When combining all components, they effectively become solar independent” says Camenzuli.

While payment plans are common, it is the product’s modular design, which is so innovative. The modular solar lamp consists of a solar panel, a rechargeable battery or mobile phone charger and a light. Users purchase the battery and the light components as needed and pay for the solar panel in small increments until the unit has been paid off. KARIBU Solar Power’s ‘rent to own’ program and ‘pay per charge’ model replicate the cash flow for buying kerosene. The products then become affordable to lower income households and have the potential to provide access to safe lighting and energy to the 500+ million African households that are currently using kerosene lamps.

With its innovative concept, KARIBU Solar Power provides access to solar lighting for those who would otherwise not be able to afford it and in turn as social, environmental and economic impacts:

Do you also have an innovative idea that has social, environmental and economic benefits?

Until 8 April, 23:59h CET you can apply for the 2014 SEED Awards. Up to a total of 55 Awards will be made available in four different categories. If you want to learn more about the Awards, see what Award Winners say about their experiences and watch Achim Steiner, UN Under-Secretary-General and UNEP Executive Director speak about the importance of the SEED Awards:

This year up to a total of 55 Awards will be made available in the following categories:

The SEED Awards for Entrepreneurship in Sustainable Development is an annual awards scheme designed to find the most promising, innovative and locally led start-up social and environmental enterprises in countries with developing and emerging economies. An international jury of experts selects enterprises, which have the potential to make real improvements in poverty eradication and environmental sustainability while contributing to a greener economy.

KARIBU Solar Power was one of the enterprises that received an Award in 2013, based on their innovative model that not only included economic growth targets, but also social and environmental benefits.