From AidPod to Anti-Diarrhoea Kit 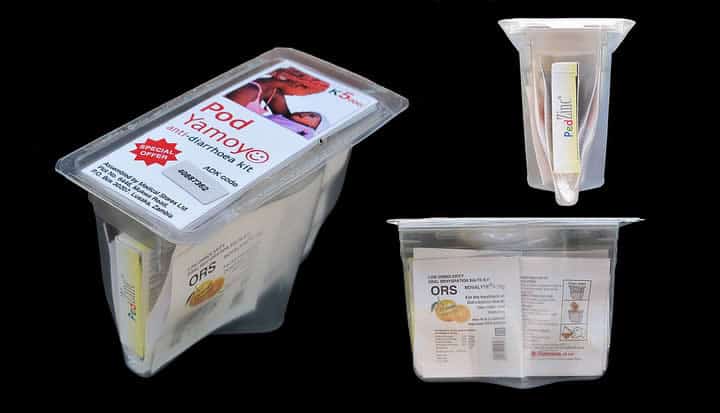 From AidPod to Anti-Diarrhoea Kit


I thought it would be of interest to describe how the packaging and the components have now come together to form the anti-diarrhoea kit (ADK) as we build-up to the start of the ColaLife trial in Zambia in September. Until the start of the set-up period of the trial we had talked about the packaging (the AidPod) as something distinct from the contents, but over recent months, with thanks to our packaging partner - PI Global, the packaging has become part of the kit itself.

The production prototype of the AidPod is made from rPET (80% recycled PET) and is transparent. This means that the branding can be carried on the information leaflet which is a component of the kit. This is really helpful because we need to finalise the packaging now, but we still have consumer consultation work to do before finalising the branding. If the branding were an integral part of the packaging, we would have had to finalise it later - after we'd finished asking our target consumers what they find most attractive from a branding point of view.

The second thing to note is the number on the leaflet. This will be carried on a label and will be applied as part of the packing process. This number will be unique for each ADK and will be used for various purposes including authentication and voucher redemption.

The authentication will work like this: anyone at any point in the distribution chain will be able to send this number by SMS text and will get an automatic reply indicating whether the ADK is authentic, or not, and its expiry date.

To redeem a voucher - given them by a mother or care-giver - retailers will enter this same code together with the code on the voucher. This will put cash on the retailer's phone, to pay for the ADK.

Note that both authentication and voucher redemption can be done without opening the ADK. To open the ADK, the heat-sealed film must be removed. This heat sealed film provides waterproof protection for the content of the ADK while in transit as well as a tamper-evidencing mechanism. Care-givers will be trained not to accept an ADK if this seal has been broken.

Removing the seal and the leaflet reveals the soap sitting in a tray. This tray separates the soap from the medication within the pack. This was a requirement of the Pharmaceutical Regulatory Authority (PRA) of Zambia.

This tray also acts as a removable and replaceable lid. Removing the lid reveals the rest of the contents and these are: a packet containing 10 zinc supplement tablets (PedZinc), eight sachets of oral rehydration salts and a drinking straw.

As mentioned in a previous blog post, these ORS sachets are smaller than those available generally on the market, which make up a litre of solution. In urban areas, litre ORS sachets can be found for sale in some of the very few retail pharmacies in Zambia; in rural areas they are not seen. Our smaller sachets will make up just 200 ml of ORS solution which is much more appropriate for the home treatment of diarrhoea.

The ADK packaging, or AidPod, is much more than a simple container for the ADK components, as the next couple of features will show.

The AidPod is also a mixer. After filling the ADK to the calibration marks with water and emptying in the entire contents of one of the ORS sachets, stir with straw to dissolve the salts. There is no need to introduce another object such as a spoon, stick or finger which might be dirty.

The AidPod is also a device for administering the ORS solution. Very small babies will 'suck' the solution from a corner of the AidPod. Older children can use the straw to drink the ORS. Straws are a novelty in remote rural areas and are likely to act as an incentive to older children to drink sufficient quantities of ORS.

The lid will also keep flies, dust and dirt out of the ORS solution and reduce the likelihood of contamination.

So there you have it. The ADK. Components as recommended by WHO and UNICEF (plus one or two others: soap and straw) in an active package which will help ensure that the kit is used and used properly (engagement and adherence).

I'd like to acknowledge the key role that PI Global, our packaging partner, have played in getting to this point. They have taken a basic concept, a few good ideas and made it real, with a patent pending.