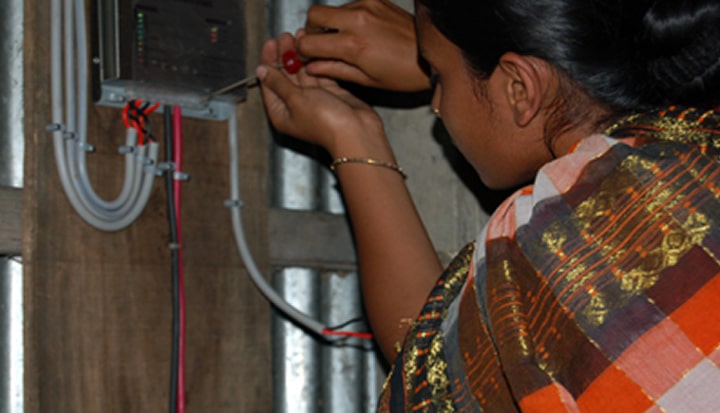 Dipal Barua has a vision. He sees his homeland becoming one of the world’s first “solar nations”. He believes solar and other renewable energies can transform the lives of the 75 million Bangladeshis who have no access to electricity. To achieve this transformation, he wants to train 100,000 women entrepreneurs to set up their own renewable energy businesses by the year 2015. If Dipal Barua has his way, Bangladesh will, he says, “become a role model for 1.6 billion energy-starved people all over the world”.

To realize this vision, the 55-year old Barua has recently founded the Bright Green Energy Foundation. It’s the latest step in an illustrious career working to bring sustainable development to the people of rural Bangladesh. Barua was one of the founding members of the Grameen Bank, the Nobel prize-winning, micro-finance and community development bank that was launched in his home village of Jobra in 1976.

“I have devoted most of my life to finding sustainable, market-based solutions to the social and economic problems faced by rural people”, says Barua. “I came to realize that a lack of access to efficient energy sources was one of the major obstacles to their development. More than 70% of my country’s rural population has to depend on primitive energy sources. This limits people’s economic opportunities and damages their health.”

In 1996, Barua founded Grameen Shakti, a non-profit organization with a mission to promote, develop, and supply renewable energy.

As managing director, Barua built Grameen Shakti into one of the largest and fastest-growing renewable energy companies in the world. But, as he recalls, attempts to market photovoltaic solar home systems on affordable terms initially faced numerous obstacles. “No enabling environment existed for spreading renewable energy technologies in rural areas. People had no awareness, costs were high, technical knowledge was low, and there was no infrastructure.”

“We had to create goodwill and gain the trust of the rural people. We trained our engineers to be ‘social engineers’ who went from door-to-door to demonstrate the effectiveness of renewable energy. We trained local youth as technicians to ensure that people would have efficient and free after-sales service right on their doorstep.”

In a country where approximately 40% of the population lives on less than US$1.25 a day, the cost of even the most basic solar home system – 15,000 Bangladeshi Taka (US$217) – was daunting for many rural households. Barua remembers trying to convince potential customers to invest in solar power systems. “I told people that for the cost of the kerosene they were buying to light their homes, they could buy a solar home system that would last for 20 years or more.”

Grameen Shakti received a huge boost in 2002 when low-interest loans from the World Bank and the Global Environment Fund enabled the organization to begin scaling-up its provision of micro-finance agreements. The most popular of a number of options to purchase a solar home system on preferential terms proved to be one with a down-payment of 15% and monthly repayments of the remainder over three years.

By the end of 2009, over 300,000 solar home systems had been installed, bringing electricity to over two million people.

And, as Barua points out, the impact on incomes is not restricted to households. “Shops and small businesses have also installed solar home systems in order to stay open after sunset.”

Key to Grameen Shakti’s success was the deliberate drive to involve women in both the take-up of renewable energy, and the installation and servicing of the energy systems. As Barua remarks, “Women are the main victims of the energy crisis. They are the ones who suffer most from indoor air pollution, drudgery, and a lack of time because of the onerous tasks of wood-gathering and cooking. We believe that women should be transformed from passive victims into active forces of good to bring changes in their lives and the communities in which they live.”

At over 40 technology centres based in rural areas, and managed mostly by female engineers, women undergo an initial 15-day course to learn how to assemble charge controllers and mobile phone chargers, and to install and maintain solar home systems. With further training, they are able to repair the systems. Over 1,000 women technicians have come through the programme, and they have been instrumental in the rapid take-up of the solar power systems.

For Barua, the success of the women technicians programme is one of his most satisfying achievements. “When we started this programme, we were not sure whether we would be able to attract enough rural women or whether they would be able to operate independently. But we trained more than 1,000 women who have developed their self-confidence and now have the opportunity to earn an income of around US$150 a month. These young women from this most conservative of societies can leave home and operate independently as technicians – this was unimaginable only a few years ago.”

In 2009 Dipal Barua won the Abu Dhabi government’s Zayed Future Energy Prize in recognition of his work to bring renewable energy technologies to rural people. Part of the prize was an award of US$1.5 million, and Barua has used this money to start the Bright Green Energy Foundation.

He plans to build on Grameen Shakti’s success, and wants to train 100,000 women, so that they can establish their own renewable energy businesses. “My aim is to provide technical and financial assistance to rural women so they can become ‘green’ entrepreneurs.”

Barua says the Foundation will take renewable energy technologies to the next level of development. “We envisage a future where every household and business in Bangladesh will have access to environmentally-friendly and pollution-free energy at an affordable cost.”

He concludes, “If I succeed, Bangladesh will become the land of renewable energy technologies, as it is now the land of micro-credit – a source of inspiration for all. This would be a very positive demonstration of what renewable energy can do for disadvantaged people around the whole world.”