Education in India: Time for a Bold New Experiment 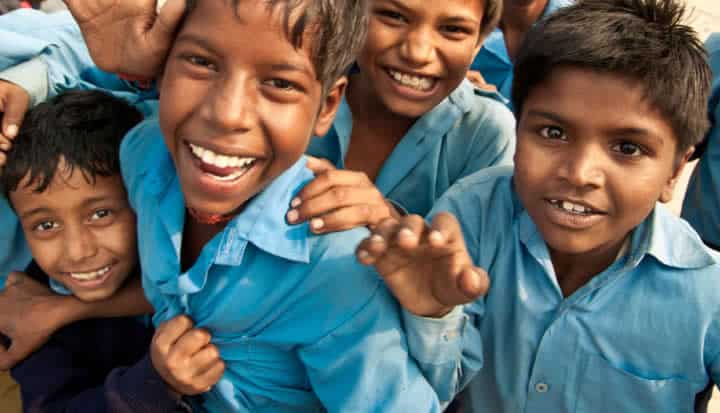 Education in India:Time for a Bold New Experiment

Click here for more stories about
Education
Friday May 3 2013

Public and private schools are failing to give children in India a good education—we need an alternative approach.

It rained hard last night in Delhi, and the narrow street in one of the city’s slum colonies—home to no less than four private schools—is ankle deep in mud. In one school at the far end of the street, I am helping nine-year-old Divesh Patel with his English class. The classroom is small and dingy—I count more than forty children crammed together on scruffy wooden benches. His young teacher is blessed with a cheery spirit that sparkles in contrast to her surroundings, but she has no teaching qualifications and a limited grasp of English.

Divesh comes from a poor family and wants to do well in English; he dreams of becoming an engineer. His father earns just 4,500 rupees (about $83) a month working as a cook in an affluent household in Delhi. Yet the Patels choose to spend more than a quarter of their income on private education for Divesh and his brother. They hope this education will give their sons opportunities and prosperity that their parents could only dream of. But will this school really give Divesh a route out of poverty?

Voting with their feet: the growth of the private sector

Progress in the education system in India could be regarded as miraculous. The number of children enrolled in primary school rose from 19 million in 1950 to 131 million in 2005. Unfortunately that miracle fades on learning that Indian students ranked 72 of 73 countries surveyed by the Organization for Economic Co-ope... (OECD). The quality of public schools in India has led parents to vote with their feet; believing that the state has failed, they are turning in their millions to private education.

Data presented in the Sarva Shiksha Abhiyan joint review in 2013 showed that government school enrollment has decreased by 2.5 percent since 2007, while private school enrollment has increased by more than 50 percent. Even though the perceived superior quality of fee-paying schools is not conclusively evidenced—particularly when socio-economic variables are controlled—parents continue to pay. In fact, 40 percent of Indian families make some use of private education, believing that it is a quick route to prosperity—a heartbreaking trend when you consider that a high proportion of very meager incomes spent on schooling may not deliver better learning. Divesh’s parents are making big sacrifices to pay for his education, but the value of their investment is highly questionable.

The kindling of a bold new experiment

What Divesh’s parents do not know is that a clause now exists in Indian education policy that entitles them to free private education. The Right to Education Clause 12 has made it compulsory for every fee-paying school in India to admit at least 25 percent of its pupils from poor and low-income families, with the state government reimbursing schools for the fee. Clause 12 is a controversial policy. Some observers call it an open acknowledgement that the public system has failed and that the challenge of providing quality education is too great for the state to tackle alone. More fundamentally, Clause 12 begs the question: is this a well-intentioned experiment or a flawed policy that could enroll millions of children in low-quality, fee-paying schools?

Clause 12 alone is unlikely to solve the education crisis. Until transparent data that demonstrates the quality of provision by private schools is available, and as long as the perception that private schools are better continues, children could move from high-performing government schools into low-performing private schools.

But Clause 12 could also signal a first step towards a bold new experiment: a middle ground that merges the best of public and private education. Elsewhere in the world, schools that are privately managed, but state-financed and quality-assured, have shown promise. They enjoy greater scope for bottom-up innovation, and have autonomy over teacher hiring and management. In other words, they have freedom to experiment with initiatives to improve teacher performance and children’s learning outcomes.

We should be cautious of the notion that this is India’s panacea: the challenges are great, and the tale of privately-managed education is mixed. But evidence, including from ARK’s own experience in the UK, is encouraging. The greater autonomy and improved efficiencies arising from privately delivered models, when paired with rigorous quality assurance and accountability measures, can deliver better learning outcomes more cost-effectively manner than the top-down state system. Such an arrangement in India, offered to exceptional operators, could be a powerful vehicle for change.

Back in that dingy school in Delhi, the teacher tells the class to repeat words back to her: Tiger! Elephant! Goat! They chant. Her energy may be encouraging, but her pupils have yet to master basic literacy and numeracy. It is heart-wrenching that Divesh’s parents are paying so much for so little.

India’s children are India’s future. Something needs to change, and this experiment could help Divesh achieve his dream of becoming an engineer. The status quo is failing India’s children. Now is the time to be bold.

Susannah Hares (@ZannaTweets) is strategy director at ARK, a global philanthropic collective and the first nonprofit organization to operate schools for public benefit in the UK and Uganda. She also writes a blog. Prior to joining ARK, Susannah served as associate director of Global Community Investment at Barclays, where she worked on inclusive business models for low-income consumers.