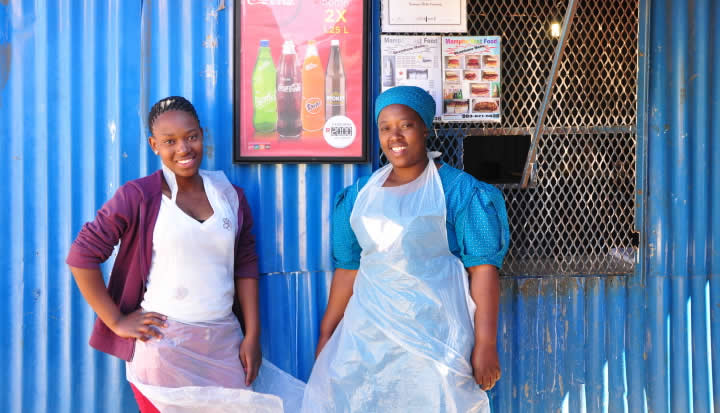 
Ngoetsana Sehlabo is known by her community in Orange Farm, South Africa as Mampho. For many years she was a hawker, on the streets selling a local dish called ‘atcha’. In 2012, she branched out and set up her own store - Mampho’s Fast Food – to sell food, drinks and snacks.

After a year, Mampho heard about a training program offered in her community by UN Women and The Coca-Cola Company (TCCC); and implemented by the organization Hand in Hand. Mampho decided to participate in the program to learn about record keeping, income and expenses, and other skills to improve her business. “Before the training I was making R250 a day. I now make R3,600 per week. The training has changed my life; my children can go to school and I don’t struggle anymore with money,” Mampho said.

Mampho is participating in The Coca-Cola Company’s global 5by20 initiative, which aims to empower five million women entrepreneurs across its value chain by 2020. As Coca-Cola seeks to develop its business in emerging markets like South Africa, the company relies on women along its value chain to operate and grow, whether distributing, selling and recycling Coca-Cola products, or providing goods and services to the company.

Through 5by20, The Coca-Cola Company and UN Women have formed a global partnership to promote women’s economic empowerment. Over three years, the partnership will reach approximately 40,000 women entrepreneurs in Coca-Cola’s value chain in Brazil, South Africa and Egypt. In addition, a key objective of the partnership is to identify successful models that can be scaled up and replicated to economically empower women around the world.

In South Africa, women face a number of barriers to employment and economic opportunity, which include discrimination, harassment and culturally entrenched ideas about gender roles. According to South African government gender statistics (2011), 72.6% of white men in the country were employed, 56.1% of white women, 42.8% black men, and only 30.8% of black women. The situation is exacerbated by a weak economy and high levels of unemployment.

The partnership between UN Women and The Coca-Cola Company aims to remove barriers commonly faced by women entrepreneurs by providing business skills and leadership training and access to peer networks and financial assets. It is hoped that this will enable women to grow their businesses, increase their incomes, create new jobs in their communities, and become role models. Hand in Hand, an NGO whose mission is to reduce poverty through enterprise solutions, is the implementing partner delivering the project on the ground in South Africa.

Participating women entrepreneurs attend nine two-hour training sessions structured into modules covering both business and wider life skills. The training takes place in their local communities in order to be accessible to the women and minimise time away from their businesses. The trainings are also scheduled around peak business hours, at times when customer traffic tends to be quieter, so participants do not forego significant earnings in order to attend. The training programme has been adapted to the key local languages in South Africa and, where possible, is delivered in the language that participants speak. The programme is also establishing peer group networks to enable women entrepreneurs to connect with one another and with potential mentors. Over time, the partners will also explore the scope for extending access to finance for participants.

In addition to funding, through its four national bottling partners, Coca-Cola is able to leverage its value chain to make its contribution more sustainable and scalable by creating market opportunities for women as well as providing training and skills development. UN Women contributes its reach and influence as a leader in promoting gender equality and economic empowerment, alongside strong linkages with South African government policy-makers. The organisation also contributes significant subject expertise in gender empowerment.

The partnership has also embarked on dialogues with the South African Department of Trade and Industry (DTI), the Department of Small Business Development and the Department of Women to explore opportunities to amplify the programme through government-led activities that boost skills development, employment and enterprise.

A monitoring and evaluation system for the partnership has been established by UN Women, which captures information against each training participant to monitor progress through the programme and assess the numbers of beneficiaries reached, the number of peer groups formed, and increases in participant incomes. A consolidated and independent evaluation will take place when the three-year programme is completed.

In its first year of operation in South Africa, the partnership has established a proof of concept and over 5,000 women were reached, with a geographical focus on the Gauteng Province and the North West Province. The partnership has entered its second year of operation and, ultimately, the programme will expand to encompass all nine provinces in South Africa, reaching a total of 25,000 participants by the third year of implementation