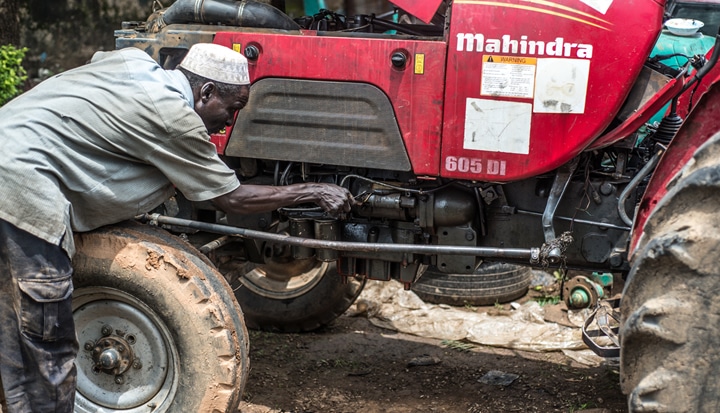 Nigeria’s economic growth rates have been running at high rates for a decade, and with a rebasing of its gross domestic product, the country is routinely cited as one of the world’s most exciting frontiers for investment.

However, says the minister of agriculture, Akinwumi Adesina, “GDP is important, but you can’t eat it.”

For all of its successes, Nigeria remains cripplingly dependent on its hydrocarbon sector, which contributes 90 per cent of government revenues, and its social structures are stretched by persistent inequality and high unemployment. Over the past decade, even as the country’s economy grew, employment actually fell, and the non-oil sector contracted.

The dependence on food from overseas does damage on a macroeconomic level. As Adesina says, Nigeria exports jobs and imports inflation—a dangerous combination.

Against this backdrop, it is hardly surprising that policymakers, businesses and development agencies have returned to agriculture, realising that the sector has the potential to solve the problems of economic diversification, job creation and poverty alleviation. In 2011, the Nigerian government launched its Agricultural Transformation Agenda, a plan to replace costly imports with domestically-grown produce. With an aim of creating 3.5 million new jobs in agribusiness and adding 20 million metric tons of food to the market by 2015, it is one of the most ambitious agricultural initiatives ongoing in Africa today.

At its heart, Akinwumi says, it is an attempt to turn smallholder farmers into businesses, driving a massive change in society and the economy as a whole.

“GDP is important, but you can’t eat it.” - Akinwumi Adesina

Seventy per cent of the Nigerian labour force is employed in agriculture, which comprises around 31 per cent of the country’s gross domestic product. At this scale, even marginal improvements in the productivity of the sector can have a massive impact on development. The impact is not only felt in rural areas. Low income consumers in cities are very vulnerable to fluctuations in price, and very exposed to the cost of imports. The food security and future prosperity of Nigeria’s booming urban middle class depends to a great extent on the development of its agribusiness.

As young men increasingly migrate to the countryside, women take on an ever-greater role in agriculture and food security. Although they have historically had limited access to land rights, technology and training, Nigerian women are already heavily employed in the farming sector. The shift in the structure of rural populations means that women’s economic empowerment is intertwined with the development of farming communities.

The average Nigerian farm is just 2 hectares, and while large-scale investments are often the first to grab headlines, the most transformative changes will be those that impact on the broad base of smallholders. An estimate from the Food and Agriculture Organisation of the United Nations says that agricultural growth is 11 times more effective at reducing poverty than in other sectors.

“When most people think of agriculture, they think of large scale plantations. That’s a very Western approach to agriculture,” says Kola Masha, the managing director of Doreo Partners, a specialist agriculture investor, who advised the government on the development of its strategy. “If you look at South East Asia and China, their focus has been on a intensive, small-scale agricultural model.”

Doreo is one of a number of organisations building a model that enables smallholder organisations and cooperatives to build commercial structures around their individual members. Smallholder groups need access to inputs, access to financial products and access to markets. The absence of all three has locked many farmers into a cycle of poverty that they struggle to break.

Financial inclusion remains a considerable problem. More than 40 per cent of Nigerians lack access to financial services, and the numbers are higher in rural areas. The rationalisation of the Nigerian banking sector in 2009 and 2010 did create leaner, better-capitalised institutions that were better able to service lower income clients, but the sector has been slow to move into rural areas. Microfinance organisations have also been slower growing than in other parts of the continent, even though Doreo Partners’ experience has been that the repayment rates on its microcredit programmes has been 99.7 per cent.

Nigeria is still a long way from turning smallholders into millionaires — the agriculture ministry’s stated goal — but progress has been strong. In just two years, the import bill has been cut by nearly $5 billion, and 3.4 million jobs have been added. For the advances to be meaningful, though, the pace will need to be sustained.

“Over the next 20 years, a number of people equivalent to the entire population of Germany will be entering the Nigerian workforce,” Masha says. “The best way to create millions of jobs now is by investing in scalable businesses that increase the profitability of small-scale agriculture.”

When the current minister of agriculture, Akinwumi Adesina, took charge in 2011, Nigeria’s seed and fertiliser subsidy system was so colossally corrupt that only around 11 per cent of the total money spent on it ever made it through to the farmers. Domestic seed production and distribution was massively inefficient, and farmers rarely got access to the material that they needed.

The ministry of agriculture completely dismantled it and handed the process over to the private sector.

SeedCo, a Zimbabwean-headquartered agriculture business, began leasing land in Nigeria’s maize growing belt last year, and has been laying the ground to set up a seed processing plant. “Nigeria is the next frontier. It’s a huge market,” Morgan Nzwere, SeedCo’s CEO says.

Nzwere, who has invested across a number of Southern and Eastern African countries, admits that there remain many challenges to investing in the country. The market may big, but to date, other countries have had easier legislation, easier access to land, better distribution systems. Identifying and acquiring land is the biggest challenge in Nigeria, Nzwere says. But for a long-term investor in the continent’s agribusiness, it is a challenge that has to be overcome.

“In Africa, the low hanging fruit have now been picked,” Nzwere says. “That’s why we’re now looking at Nigeria.”
The results for the country have been considerable. From 15 seed companies operating in Nigeria in 2011, there are now 80, and distribution of improved seed has risen from 500 metric tonnes to 50,000 metric tonnes in 2013.