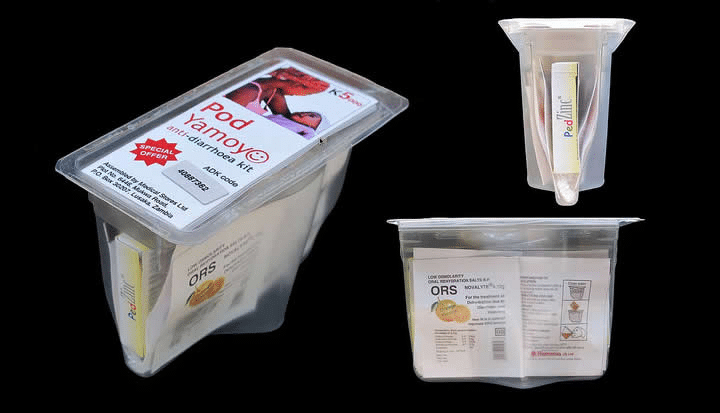 
I've just got back from the field, with so many stories to tell and pictures to show, to the news that ColaLife's Kit Yamoyo has won the Product category of the Designs of the Year 2013. The maverick in me thinks it's fantastic that something designed with the poor and for the poor, and with the word 'diarrhoea' in it, has won a mainstream, international design award. I think it's safe to say that this hasn't happened before and I congratulate the judges for being so brave.

This decision is going to save even more lives - people need to know that diarrhoea, a minor inconvenience in more developed countries, is the second biggest killer of under 5 children in sub-Saharan Africa - and this will help.

Jane has quickly put this press release together which covers the main points we'd like to say.

Wins Product Design of the Year 2013

A ‘kitchen table’ concept, now saving children’s lives in Africa, has been selected by The Design Museum as Product Design of the Year 2013, beating off competition such as the Olympic Cauldron. It must be the first time that an anti-diarrhoea kit takes centre stage as a design icon, standing alongside a renovated tower block in Paris, a film on fashion and a UK Government website.

The concept stems from a question that bothered UK Aid worker Simon Berry in Zambia, in 1988: Coca-Cola is available even in remote villages yet simple medicines to treat the second biggest childhood killer, diarrhoea, are not[1]. Why?

When Simon re-visited the idea in 2008, his wife Jane suggested making use of the unused space in a cola crate to carry an anti-diarrhoea kit. By 2009, Simon and Jane had set up the ColaLife charity[2], and, from their kitchen table - using Social Media - won the goodwill of Coca-Cola to explore the idea. Funded by an award from UnLtd[3] in 2010, they gave up their jobs to bring together some of the best minds from big business, academia and non-profits: supply chain experts, health experts, logistics and design[4]. These included Rohit Ramchandani, now ColaLife’s Public Health Advisor. Visits to Zambia were funded by Simon’s Boulogne-Biarritz Cycle ride[5] in September 2010.

After a chance meeting at a presentation, packaging expert PI Global[6] took the brief to design a robust pack to carry WHO recommended diarrhoea treatments[7], a clever plastic container which, vitally, helps illiterate mothers in rural Africa accurately measure water for the child-sized sachets of Oral Rehydration Salts it provides. Also containing Zinc to help prevent diarrhoea recurring and soap for hand-washing, the pack – dubbed ‘AidPod’ by the BBC[8] - acts as a cup and a re-sealable storage vessel[9]. Most important, ‘Kit Yamoyo’ was designed with input from African mothers and carers, most of whom live many hours’ walk from a health centre. In Zambia, where a trial is underway[10], independent rural retailers are buying it by the boxful[11], to carry out to their small shops in remote villages, because it’s designed to yield a profit – just like Coca-Cola does. These retailers, trained by the project, have, in the last 6 months, bought over 20,000 Kit Yamoyo, to sell at ZMK5 each (just under $1). The most promising retailers are not only serving their own community but making a gross profit on this new product of $25 to $60 per month. In rural Zambia, that feeds a family.

As Simon and Jane, who are now in Zambia managing the project, agree: “We started with the space in the crate, but much more important for the long term is the space in the market. The millions of the world’s poor want good, affordable design that meets their needs. They don’t have much to spend and want to spend it well, ideally close to where they live. Good design is not only for the rich: the poor of the world deserve the dignity of attention[12], from designers and from corporates as well as from the public sector and aid agencies.”

DfID is the trial's majority funder and Justine Greening, the UK’s International Development Secretary, said: “I warmly congratulate ColaLife for this tremendous achievement. Their innovative use of Coke’s distribution system to deliver vital supplies is helping to save countless lives. It is a fantastic example of how we can work hand in hand with business to help alleviate the suffering of the world’s poorest people.”

[1] "We know that basic, cheap oral rehydration salts and zinc stop children from dying from diarrhoea, and we recommend that all countries make them accessible. But our surveys show that, at present, ORS is available in less than half of pharmacies and kiosks in African countries and zinc is not available at all in many places.” Dr Elizabeth Mason, Director of WHO's Department of Maternal, Newborn, Child and Adolescent Health. http://www.who.int/mediacentre/news/notes/2011/mother_child_medicin...

[4] In the planning stage, expert input included free advice from: Rohit Ramchandani, now undertaking a doctorate in Public Health at Johns Hopkins University USA and the trial’s Principle Investigator; Dr Prashant Yadav, then Professor of Supply Chain Management at the MIT-Zaragoza International Logistics Center, and now at Michigan University; Salvatore Gabola, Euan Wilmshurst and Adrian Ristow of The Coca-Cola Company; Tielman Nieuwoudt, Supply Chain Lab; Zahid Torres-Rahman, Business Action for Africa; Boxwood; staff at Defra; students at Hult Institute and Kings College London, and many others. Johnson & Johnson provided training via their Innovation Boot Camp and went on to be the first funding partner for the Zambia Trial. The ColaLife Operational Trial Zambia was designed and is delivered by a local partnership in Zambia including UNICEF Zambia, Ministry of Health, Medical Stores Ltd Zambia, SABMiller, Keepers Zambia Foundation and COMESA/TMSA

[7] WHO UNICEF 2009, Why Children are still dying from diarrhoea and what can be done.’

[12] ‘the dignity of attention’ is coined from CK Prahalad ‘The Fortune at the Bottom of the Pyramid’, 2010