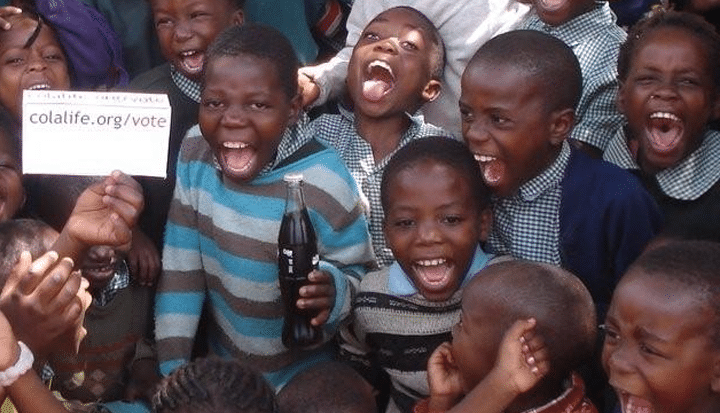 
Image credit: Alison Pearson. Thanks to the children of the N'gombe Compound in Lusaka, Zambia.

A handful of ColaLife supporters attended last night's Business Fights Poverty event at the Commonwealth Club last night to hear Euan Wilmshurst, Stakeholder Engagement Manager, The Coca-Cola Company, give a qualified YES to trials of the ColaLife idea before the end of the year in Tanzania. Euan did give himself a fair bit of 'wriggle room' but this is highly significant development for our camapign. This is the first time Coca-Cola have mentioned ColaLife in public. 350 people registered for the event and most of them came. The auditorium was completely full and 70 people watched the event live over the internet.

Coca-Cola's response to the Business Call To Action has always been tighly focussed on growing Coca-Cola's core business in Africa but doing this is a way that maximises impact in terms of the alleviation of poverty (see a fuller explanation here). However, last night, Euan made a specific reference to ColaLife and stated that they wanted to go beyond their original intention and look at the opportunities for social marketing and the distribution of 'social products'. This is a big step for Coca-Cola and the campaign and in the right direction.

Delegates were invited to ask questions and my question went something like this:

My name is Simon Berry and in my spare time I run the ColaLife Campaign which Euan generously referred to in his presentation.

ColaLife wants Coca-Cola to open up its distribution system to take social products like Oral Rehydration Salts, Mosquito Nets, Vitamin A Tablets and so on. We have suggested that they do this using pods like this [waves aidpod in the air for people to see] that fit between the necks of Coca-Cola bottles in the crates.

There are more than 8,500 people around the world on a Facebook Group who want to see this happen. They range from logistics professionals to people working on the frontline in public health projects in developing countries.

Usually, the word 'campaign' is followed by the word 'AGAINST'. But the ColaLife campaign is not AGAINST Coca-Cola. We want to make it easier for Coca-Cola to step a little outside their comfort zone and do something innovatory, something extraordinary, to help save lives, particularly children's lives, in low income countries.

My question to Euan is: Will we see trials of the ColaLife idea in Tanzania before the end of the year? [laughs from the delegates!]

Euan's response went something like this (hopefully you will be able to see precisely want he said when the video of the event is available).

The response to Simon's question is easy. Yes, we are planning to run trails of the ColaLife idea before the end of the year. I think I have allowed myself enough wriggle room there. [he then went on the expand on the 'social' elements of the planned trials but re-stated that it was crucial that this element did not undermine the success of the core business - something that we would agree with]

This is an amazing achievement for us and a big step forward for the campaign. But we can't just sit still and wait. If trials are going to happen before the end of the year, there is work to be done right now. We are going to need thousands of aidpods that have been prototyped and produced by then. So that's our next task - to ensure that when Coca-Cola are ready to start the trial, there are thousands of Aidpods avaiable in Tanzania for our idea to be trialled properly. Google! Where are you?

I posted this story on the ColaLife Blog early this morning and on twitter and things went ballistic! The BBC picked up on the story through Twitter and Euan and I were together again in a BBC studio this afternoon for an interview . . . we are on to something here.

When I walked in, Euan said "Hello, Simon, long time no see!". Cool.

The interview will go out on the PM programme (BBC Radio 4) later in the week or on Saturday. I'll let you know.

PS: As an aside, I'd like to register my thanks to all involved in arranging this series of events. The content has been thought-provoking and educational. But the most impressive thing is they have been OPEN so people like me can attend and engage. I don't know what it's felt like for 'the professionals' who would be on the invitation list for similar events but hopefully the openness has added value for you too.