Join the global collaboration community of 25,604 professionals from business, government and civil society working together on the world’s most pressing challenges.


Realized Worth was unable to make it to the 2009 National Conference on Volunteering and Service in San Francisco last week, and for awhile we were seriously bummed about missing out on one of the most important volunteerism conferences happening this year. But then, we realized that given the live webcasts, blogs, and twitter it turns our we just might be able to keep up with what’s going on.

And that made us feel better.

Chris Golden has given his permission to post a recent blog from myImpact.org. We feel this blog provides a concise and insightful snapshot of some of the bigger themes of the conference. If you appreciate Chris’ article, you’ll love the new site at united.myImpact.org. You can join the conversation there and connect with others who want to make an impact through service.

This week, myImpact.org was at the 2009 National Conference on Volunteering and Service in San Francisco. Throughout the next week, we’ll be blogging about what was learned during the conference about how service is a solution and how volunteering and service is helping to grow a civic energy generation. Heading into the weekend, here are some of the overarching themes that developed during the Conference: 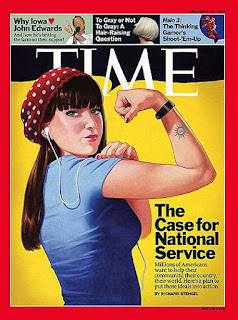 • This is an extraordinary moment. If the ServiceNation Summit in September 2008 was the impedance of the formation of a united coalition to advance service as a national priority, then this conference was extraordinary coalescence of those who will carry out its efforts. From the new Administration to service organizations of all sizes, to volunteers and grant recipients, business and philanthropic leaders and leaders in new technology and social media, nearly everyone with a stake in this sector was represented

• United We Serve is only the beginning. On Monday, First Lady Michelle Obama officially kicked-off United We Serve, the Obama Administration’s summer service initiative. What we heard consistently from Administration officials represented at the Conference, including from the Domestic Policy Council and the new White House Offices of Public Engagement & Social Innovation, was that the efforts of promoting service, providing resources to organizations and volunteers and growing this modern movement will not end on September 11. That day, declared for the first time this year as an official National Day of Service and Remembrance, will begin an effort to build on what is learned during the 12-week United We Serve program this summer

• Service organizations are turning to new technology. Again and again small and mid-size organizations asked questions about how they could use technology to streamline their work and they wanted to know how they could do so in the most efficient way possible to enhance their current programs without adding an additional burden. This is the challenge of the sector: applying the new tools of which there is so much excitement, effectively.

• New cross-industry partnerships must be forged. In order to build the idea of a “spectrum of service” or a “service lifetime” as was discussed by CNCS Board Chairman Alan Solomont, the silos that have traditionally confined service and restricted its ultimate impact must be broken down. Already, we are seeing signs of this. The Entertainment Industry Foundation, representing the most talented and well known recording artists and actors of our time, has joined with ServiceNation to dedicate a week of television programming on Oct. 19 to promoting service. Microsoft has announced a partnership with the Corporation to build a help center to answer non-profit organization’s questions about using technology in their work. Corporations represented at a business CEO roundtable said they are aligning their annual giving with the volunteer work of their employees. Service is not just limited to the non-profit sector. It is not just a government program administered through one agency. The extent of the problems facing our country, and the tremendous potential that service presents as a solution, demands that the private sector joins with government, non-profits and philanthropic foundations in a united effort to promote service.

Service got a lot of attention this week but it is an imperative that the news and attention does not stop now. There are just over 11 weeks remaining in the United We Serve initiative. Organizations can register their projects at serve.gov. Volunteers can search for opportunities there, on a database powered by allforgood.org. And those wanting to connect with others, share stories and best practices and inspire others to become involved can create a profile at united.myImpact.org.

Join the global collaboration community of 25,604 professionals from business, government and civil society working together on the world’s most pressing challenges.