Join the global collaboration community of 30,353 professionals from business, government and civil society working together on the world’s most pressing challenges.

As the world continues to produce, buy, and discard newer and more advanced electronic devices and appliances, countries are also facing the growing problem of what do with the waste generated when these products are discarded. If not properly processed, this e-waste (also known as waste electrical and electronic equipment or WEEE), poses a serious threat to the environment and to public health, especially in developing countries where e-waste is often shipped.


As the world continues to produce, buy, and discard newer and more advanced electronic devices and appliances, countries are also facing the growing problem of what do with the waste generated when these products are discarded. If not properly processed, this e-waste (also known as waste electrical and electronic equipment or WEEE), poses a serious threat to the environment and to public health, especially in developing countries where e-waste is often shipped.

At the same time, informal e-waste recycling has rapidly increased both as a way of managing e-waste and of generating income for otherwise unemployed workers in developing countries. These workers collect unwanted electrical and electronic equipment such as computers, TV-sets, fridges and cell phones from households or from sites where these items have been dumped. Organized in informal cooperatives and associations, the so-called waste pickers then dismantle the electronic items to salvage precious metals and other valuable parts that they can sell to recycling companies. This work is a viable option for those with low levels of formal education, enabling them to make ends meet for themselves and their families.

However, e-waste collection and disassembly can be dangerous to both the recyclers and the surrounding environment if it is not done with protective equipment or the means to safely dispose of toxic materials. Women in particular are at risk, as they are typically the ones who dismantle and separate the parts. In absence of other options, this dangerous activity is often conducted in homes, without protective gear or other safety measures, and often in the presence of children. Also, residual e-waste that still contains toxic substances, such as cathode-ray tubes or plastic casings from televisions and computer monitors, are not sent on to recycling centres and are discarded on roadsides and in alleys and creeks – popular playgrounds for children. 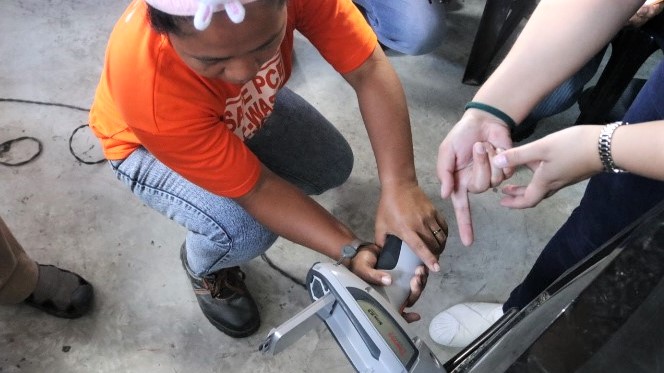 Joanna Amican, being taught how to use the x-ray fluorescence equipment during a training workshop, March 2020

In order that informal e-waste recycling can benefit everyone, recyclers must have the resources to do their work safely. In a recent project in the Philippines, the United Nations Industrial Development Organization (UNIDO) and the  Department of Environment and Natural Resources  – Environmental Bureau joined forces, with funding from the  Global Environmental Facility  (GEF), to support safe informal recycling in Camarin and Bagong Silang, two low-income districts in the Manila metropolitan area. Camarin hosts the largest informal e-waste collecting and dismantling community in the country, and it also processes e-waste from the adjacent Bagong Silang—the most populous municipality (barangay) in Manila, with a population of 250,000.

To help prevent pollution and to effectively and safely process the non-recyclable hazardous substances, the project provided a new facility and safety training for recyclers. The existing municipal waste facility in Bagong Silang was upgraded into an e-waste treatment, storage and disposal (TSD) facility. In addition, the women and men working as e-waste collectors and dismantlers have received education and training on safe processing practices. Finally, workers were supported in obtaining required licenses and formalizing their employment with the municipality, thereby enabling them to increase their income. The initiative has been recently highlighted by GEF, donor of the project, as a good practice example for sustainable and inclusive programming.

Due to the high risks facing many female recyclers, the project applied a gender responsive stakeholder engagement process to document the gender-specific roles and dangers of informal e-waste recycling. The project went beyond just identifying risks to ensure that women were never left out, and that they received information and training about environmentally-sound procedures and technologies for collection, disassembly, segregation and recycling of e-waste. The project tracks its results with sex-disaggregated indicators to ensure a balanced gender engagement and continues to work towards improving women’s participation and leadership in the management of e-waste recycling.

“Most of our communities here are involved in waste disposal. The main purpose of this project is to link the informal waste sector to the formal waste sector,” said Jonas Leones, Deputy Minister of the Department of Environment of the Philippines.

Opened in February 2020—just before the global outbreak of the COVID-19 pandemic—the Bagong Silang TSD facility is the country’s first facility of its kind that is run by the community itself. Representatives of both the Bagong Silang barangay and the city’s informal waste sector were involved and consulted in the planning phase. The active participation of women dismantlers, who constitute one third of the waste picker associations’ official representatives, was of critical importance since the facility especially benefits these informal e-waste dismantlers who needed a safe and dedicated work area for dissembling. In addition to the new workspace, practical workshops provided recyclers with the necessary skills on how to disassemble parts according to international safety and security standards and on the proper use of modern dissembling technology, tools and protective equipment. Reflecting the gender ratio of the profession, 70 per cent of the dismantlers receiving the training were women. 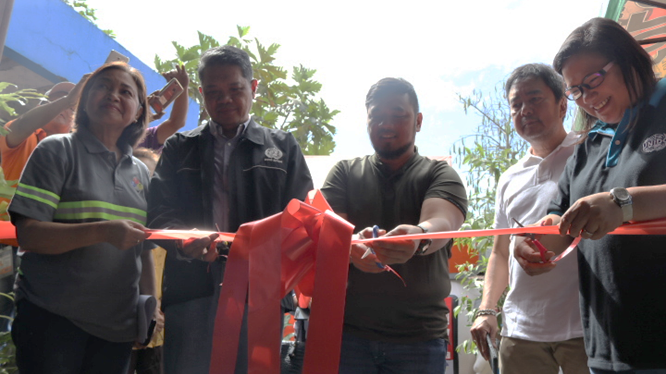 “The use of personal protective equipment is very new to us, but we’ll manage and get used to it because it’s for our benefit,” added Benedicto Nario, President of the Bagong Silang informal waste sector officers.

Already more than 1,000 television cathode ray tubes have been collected and processed through the TSD facility, resulting in a significant reduction of e-waste dumping in the area’s rivers and alleys.

Carmela Centeno, the UNIDO project manager, explained, “There is always a problem with how to help the informal sector involved in e-waste processing in order to make the work safe and more economically beneficial. This structure is only the beginning, and hopefully a year from now we will get to see proper e-waste processing inside the facility for a better environment.” Steered by the local community, environmentally sound e-waste management has become not only a goal in itself but also a means to increase the livelihoods of the women and men working in the precarious informal sector. The project addresses health, environmental and livelihood issues, while also emphasizing community ownership and ensuring that both women and men participate in and benefit from the activities.

Click here for more stories about
Women
+Join a Challenge

Join the global collaboration community of 30,353 professionals from business, government and civil society working together on the world’s most pressing challenges.